Jukka “Yucca” Korpela,
the man behind the IT and communication free information site

I’m an information technology (IT) generalist and specialist. This means that I have some specialties, such as some areas of programming, Web authoring, character codes, and legal issues relevant to IT, but I also try to know a little bit of everything. If you know what uomo universale means, you roughly know what I think I try to be. In particular, I often write down things that I have learned and make them available to others, to help them learn things a bit more easily than I did. I learn by teaching, think by writing. (That’s what the Latin motto above means.)

So what do I do for a living? Well, quite a few different things: writing books, articles, and columns, teaching, and consultation on diverse issues like character codes, web design (especially accessibility), using the Internet, computer security (especially end user perspective), using the Finnish language properly, and copyright. – That’s what used to do; since 2015, I am retired, though I still do such things occasionally.

For quick reference, see contact information, facts about me and my home address.

My way of looking at IT things is to see them as communication between people, between man and machine, and between machines. There’s much more in communication than just technology, such as the problems and possibilities of human languages, cultural differences, logical structuring of information, and communication itself as a process, as something that always fails, except by accident, without the participants even realizing that. This explains most of my orientation and specialties. The rest is mostly explained by my education (pure mathematics and a little physics, philosophy, and statistics) and my employment at Helsinki University of Technology Computing centre from 1974 to 2001. (So what happened in 2001? See the site history.)

What about my name? See my documents about the names Jukka and Korpela.

"Jukka" or "Yucca"? As you like it. There’s a separate short explanation of my use of the nickname "Yucca". As regards to the use of the middle initial "K.", I use it in more formal contexts, to distinguish myself from other Jukka Korpelas (such as Jukka Korpela, professor of history). Being an Aquarius, I don’t believe in horoscopes, but I have noted, with some surprise, that the descriptions of people with the name "Jukka" at the Kabalarian Philosophy site apply to me to rather well. 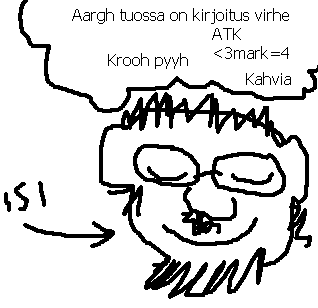 My daughter Minna has drawn a picture of me. (She has also taken a photo that might be called Bear with me.) In the drawing, isi is the Finnish word for “dad,” and the text in the thought bubble contains, freely translated, the following:

I have a blog, Yuccablog, but there is not much interesting there. Blogs are products of self-centered minds, and I am not going to admit that I am self-centered!